CROSS DAY FESTIVITY IN GRANADA (MAY 3)

CROSS DAY FESTIVITY IN GRANADA (MAY 3) 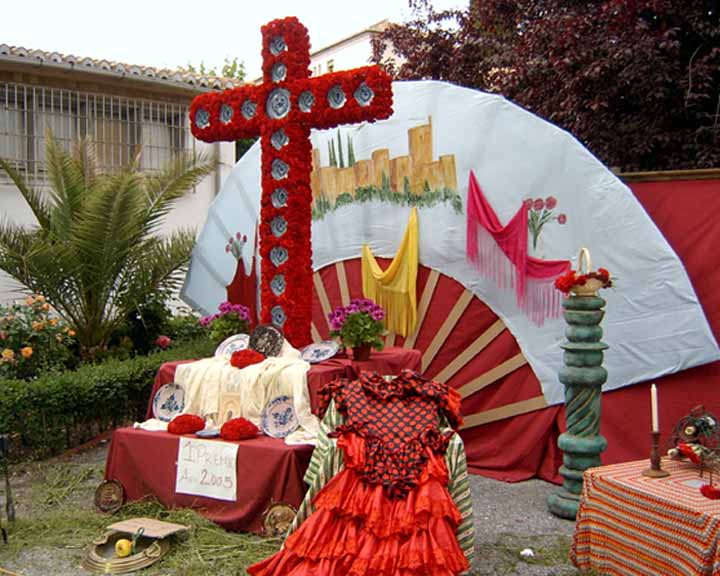 It is by far the best day of the year, the most attractive to locals and visitors, and if you ask me, perhaps the most authentically Granada. We speak of the May 3, ie, the Day of the Cross, symbol of student fervor, claims, flag and pride of joy and good fun. Simple and popular character, best outgoing, and unassuming, is by far the biggest day and has original Granada. No other local holiday exceeds or reaches him, nor the shadow makes Corpus, all smack beside prefabricated boring and forced. The crosses are instead a burst of freedom and fraternity, wasteful Andalusian unprecedented sympathy or comparisons in these parts.

All alike are released, without complexes or preparations that afternoon through the streets and squares of Granada, in abundance and come in droves, so disorganized and adventure, without obligation or script to follow, open in addition to any unexpected encounter fortuitous or unexpected sight. Hence always been said that to tie in Granada, nothing like the crosses, that at least in my time, from rickety depth festive, when the move came down to the caves of Sacromonte, the Prince and Country Walk the Titas, without increases to the Alhambra for the most daring and desperate. Hence, too, love all expectations, projects or forecasts, pass, concentrate and produce the awaited day. No wonder many couples Grenadines, tear its glorious past that date unique, truly legendary in our calendar. It is moreover a day of a special color of red carnations, new shoes and cool gypsy, coming-out, welcome or spring premiere new mother, sparkle in the eyes, sing, chamomile, clapping and castanets. Granada is dressed and adorned for the occasion with such high crosses majestic flowers embracing the heavens, yellow copper pans, embroidered shawls and pidistras pots, decorating and prestige floors, patios and windows of the city, rivaling in grace, good taste and flavor, neighbors and merchants of the place. On the itinerary, and travel activties, rise as many metal troughs portable bars, where dispatches shoving, shaking plastic cups, including tuberose smells, smoke Moorish kebabs, and speakers unhinged. Meanwhile and around, dominates and subjugates Sevillana dancing, more ours than ever, snatching and conquer the senses, to the sound of a screaming loud infernal.

It is ultimately the triumph of the common people who just want to have fun cheaply and easily, without the obligation of having to pay for it, to be bastándole, tripping, or rub, and little else. This explains and even justifies the huge success of the so called bottle, as people, not just young people, what they really need is a place to meet, to talk, gossip, show off and flirt so uninhibited, and natural, as in a birthday party. The least are the glasses, the store, or show seised, or go, it is always best in the noise outside, at halftime or in between, in the bathroom, the tail or the canapes, the urgent need to interact freely and without parental control, allowing and encouraging a resurgence or breaks through the missed opportunity, and the missed opportunity. All this and more means the day of the Cross, party native of Granada, and plural quintessential rebel, where the hawkers abound, and the officers withered, poor shadow and antipathy. Andalusian Party youth like no, wide open to the world.