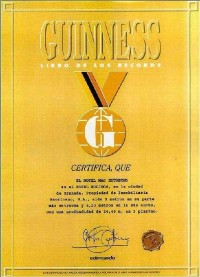 Hotel awarded the Guinness record for being the world's narrowest hotel. The property is situated at the foot of the Alhambra in the Realejo. That does not detract from comfort, because it has only nine rooms, equipped with all the services and completely renovated.

On-site facilities include a bar, restaurant and parking.

The Molinos Hotel is situated in the street of the same name, in the Realejo, both street and neighborhood, were the scene of decisive moments in the history of Granada. Only 9 rooms make it an intimate family hotel, the rooms are comfortable, decorated in soft colors and furnishings. They have air conditioning and heating and are equipped with telephone, color TV with remote control, safe and independent worktable.Hotel awarded the Guinness record for being the world's narrowest hotel, 5 meters at its narrowest and 5.20 meters at the widest, with a depth of 16.40 m.